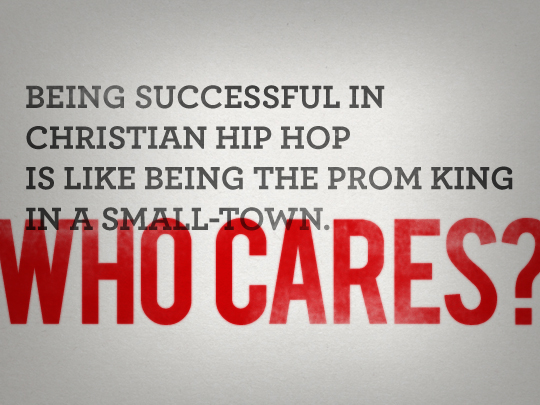 Being Successful in Christian Hip Hop is Like Being The Prom King in a Small-Town. Who Cares?

I recently posted the title of this article as a status update on Facebook hoping to provoke a thoughtful discussion within Christian hip hop. My heart behind it was not to spread negativity. What I got, however, was exactly that—ending in an unhealthy moment for the provoker and the provoked.

The truth is that I care deeply about this scene. Christian hip hop has been part of my life professionally since 1997… even longer as a fan. The status was a legitimate #FAIL on my part.

To be clear, I reject the notion of a sacred and a secular hip hop (it’s all just hip hop). However, there is most assuredly an organized community of content creators, curators, and consumers—often separatist—surrounding a sub-genre of hip hop, and that is who I intend to speak of and to.

The status update was welcomed with an array of colorful responses, but, mainly these three categories:

I thought it would be obvious that my status was tongue-in-cheek and the main takeaway would be even more obvious. My point was simply a reminder to all of us who are seeking to be the big fish (see what I did there?), that generally the pond is extremely small.

I’ve bounced around different pockets of our scene and seen a universal desire to be at the top. Plus, aside from the occasional overtly spiritual lyrics or the steeple on top of the venue, there isn’t much difference between Christian and mainstream hip hop. With our religious masks on, I think we would all agree that a quest for fame would be the wrong motivation for this “Christian hip hop”.

On top of that, the reality is that fame (in the context of this scene) is a glass ceiling on a one-story building. This should be enough to separate the wheat from the chaff. In other words, those who aren’t serious about using this medium as a tool to either reach the lost, edify the elect, or make art to glorify God and enjoy Him forever should naturally filter out.

But alas, it hasn’t. Why not? Because Christian hip hop continues to experience moderate success and grow incrementally every year. It is attracting more people to the “ministry” than a California Gold Rush. I also believe that as the power shifts from Generation X to Generation Y, more people are coming on the scene that actually enjoy being the prom king in a small town. It’s safe. It’s easier! This is attractive to an increasingly entitled, shortcut-seeking, generally lazy society.

The impetus of your involvement in Christian hip hop has to be bigger than yourself. Get plugged into a local church. Serve a local congregation with your talents and gifts. Submit yourself to Godly elders and sit under Gospel-centered teaching. Develop relationships with real people! Get to know these people by talking about deep and amazing subjects over independently roasted coffee.

The internet is not your church. Get off the computer and go outside to breathe fresh oxygen generated by plants designed by God.

The local church is your greatest tool. It is the most advanced system to give and receive the kind of mentor-ship and discipline necessary to successfully navigate and safely steward a platform such as Christian hip hop.

The culture wars will not be fought on Facebook (especially not without commercial interruptions). Quit being so socially awkward (this is as much to me as it is to you)! Know this: unless you are God, you are incapable of knowing what someone’s motive is.

So, the next time you read a comment on the internet, ask the author before you assume! Folks are more accessible than ever before. In fact, let’s put it into practice. If you have any thoughts or concerns, I’d love to hear from you! Use the comment section below or reach out to me on Twitter.

8 years ago in Blog
FREE Mixtape!
Read This!

Braille Hits Double Header in The June Issue of “The Source”