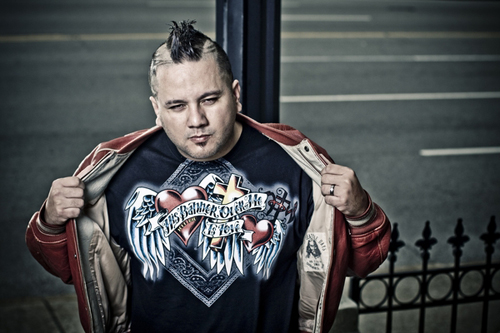 By the time the RedCloud was in seventh grade, he was an active gang member, he had been arrested twice and he had participated in a drive-by shooting.  Clearly, his life was going downhill fast and the Hawthorne, California-raised rapper knew he had to make a change.  “I was so determined to live better and do this for my mom and my family,” RedCloud says today.  “I knew I had to get out of the gang.  I knew I was going to die or go to jail, like I already had.”

This realization set in motion a remarkable evolution into from a gangbanger to a rising rapper who tours the country promoting a positive, credible message and whose latest album, Hawthorne’s Most Wanted, reflects his grisly past while offering inspiration and hope for a better tomorrow.  But soft rap it is not.  RedCloud’s passionate music hits with the urgency of classic West Coast gangster rap and showcases his Golden Era-inspired lyrical skills.

The album’s forceful title track features Kurupt and finds RedCloud detailing how he navigated through the treacherous streets of his gang-infested Los Angeles-area hometown.  Named after the late ‘70s cult classic film, the somber “Boulevard Knights” features RedCloud at his most personal.  Here, he raps about the death of his father, a stoic gangster who succumbed to heroin while RedCloud was on tour in 2005.  “I usually don’t write that personally,” he says.  “I don’t like to let everyone know everything about me, but that was just a subject that was real dear to me, my connection to my pops.”

Much of the rest of Hawthorne’s Most Wanted is decidedly more upbeat and optimistic.  The funky “Tapatio” features RedCloud and Pigeon John trading braggadocio rhymes, while the thumping “Guns & Roses,” which presents RedCloud alongside heavyweight guests Jayo Felony, Eek-A-Mouse and Tonex, examines spiritual topics.  “405,” with Lord Zen and Dannu of the Visionaries, allows RedCloud to salute the famous California highway that connects several prominent cities, including Los Angeles and San Diego.

Growing up, RedCloud didn’t think much beyond his neighborhood.  His father gave him his first tattoo when he was eight months old, cementing his ties to the streets.  When RedCloud was in sixth grade, he developed a love for writing raps, but he had a bigger craving.  “I remember wanting to belong to a family because I knew that all my family was gang-affiliated,” he says.  “The feeling of not belonging to anything was eating me alive.”

RedCloud found the family he craved by joining a gang.  But one day during eighth grade, he attended a hip-hop assembly at his school that changed his life.  A collection of former gang members spoke about the transformations they had made in their own lives, which inspired RedCloud to ditch his gangster past and embrace a righteous path.  “I thought it was going to be easy once I wanted to start following God, once I wanted to get cleaner.  But it started getting harder.”

That’s because you have to get jumped out of a gang.  The pummeling he took from seven gang members resulted in busted blood vessels in his eyes and a bump that remains on his forehead from his head being stomped into the concrete 15 years after the incident.

Although the beating left physical marks, it freed RedCloud to pursue his new path, a positive one that includes being one of rap’s most promising artists.  That’s because in ninth grade, RedCloud started carrying his Bible and focusing on rapping.  As his rhyme skills developed, he quickly became a fixture on Los Angeles’ underground rap scene.

In 2001, RedCloud independently released his debut album, Is This Thing On?, and steadily built a network of fans on the underground scene.  The following year, he started garnering major attention by winning Los Angeles radio station Power 106’s on-air freestyle battle for six consecutive weeks.  Kurupt, who like RedCloud attended LeuzingerHigh School in Hawthorne, was among those who called the radio station to let RedCloud know that they were impressed by his vivid, complex battle rhymes.

RedCloud was also establishing himself as a memorable performer.  Among his most loyal fans are those on Indian Reservations, who can relate to RedCloud’s Mexican and Indian heritage.  By touring relentlessly — he’s slated to perform more than 140 shows in 2007 — RedCloud has been able to sell more than 40,000 copies collectively of his first two albums, Is This Thing On? and 2003’s Traveling Circus.  His touring has also set the stage for Hawthorne’s Most Wanted, which RedCloud hopes can move rap forward by looking toward its past.

“Original hip-hop was uplifting and positive,” he says.  “It gave somebody hope and changed people’s lives.  It was street poetry that anybody could relate to.  Now, people are rapping about things that your average person can’t relate to — the cars, the diamonds, the money.  I rap about average person stories, issues that people don’t usually deal with.  I want to let them know what’s going on.”

And Hawthorne’s Most Wanted does just that, with passion and purpose.