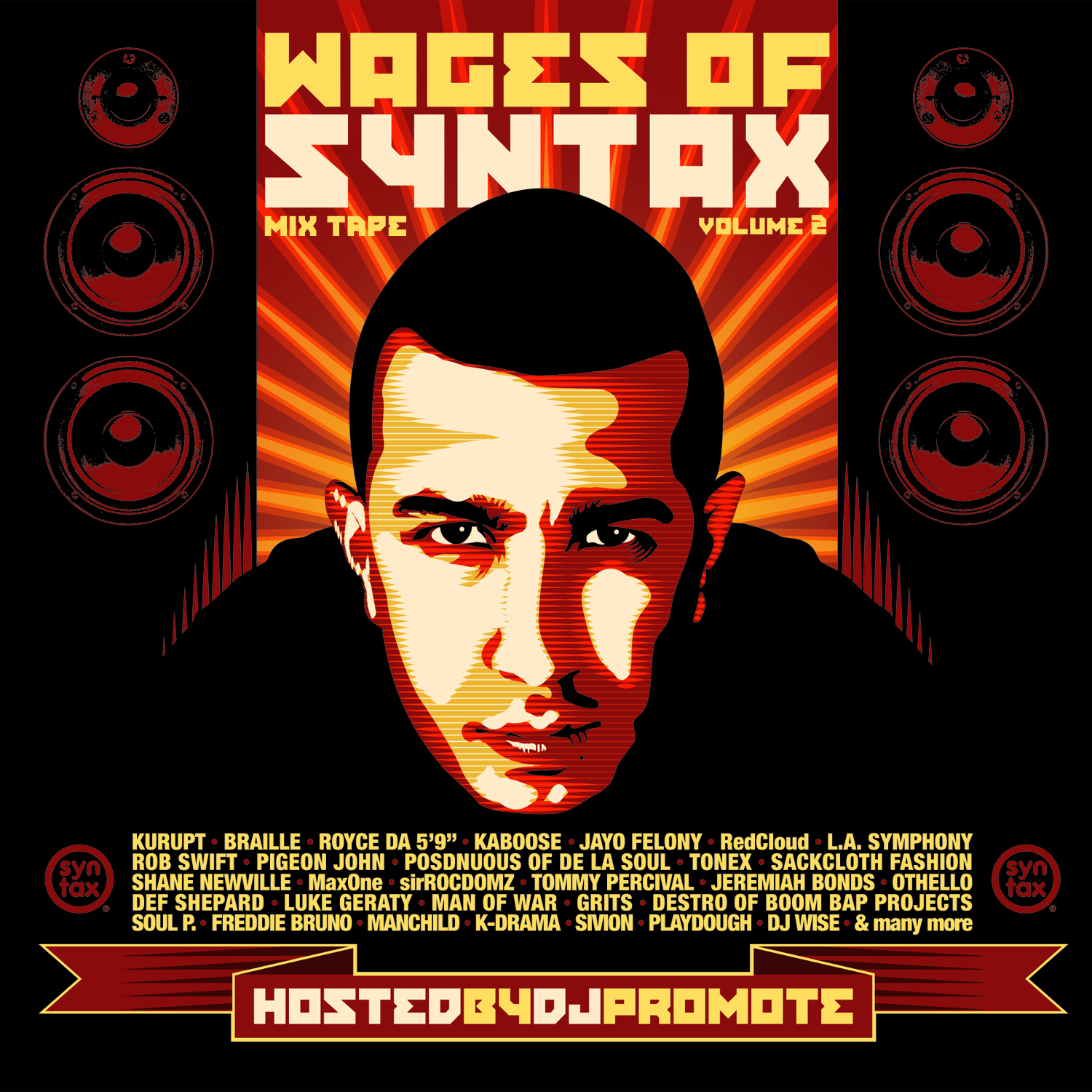 The Wages of Syntax Returns with DJ Promote

This album was produced with hip-hop lovers in mind. DJ Promote remixes 60 minutes worth of street-worthy beats and rhymes. “There’s never been a mixtape like this in our market…  It’s a party in a box,” says Syntax Records President Tim Trudeau, who goes by the moniker “sirROCDOMZ” when producing. “I believe that this second round of  Wages nailed the heart of a mixtape. Anyone who listens through entirely will walk away impressed.”

Wages kicks off with Kaboose’s “Goin’ Outta Control” featuring Royce Da 5’9″ — just in time for the brand new animated music video that was one of the five featured on Yahoo Music. Wages continues to hit fans hard with a constant stream of bangers such as “Universal” by LA Symphony and “Hawthorne’s Most Wanted” by RedCloud featuring Tonex and Kurupt. It goes as classic as 2003’s “I Sigh” by Sackcloth Fashion to the 2008 title track from Braille’s The IV Edition.

Wages was a collaborative effort  that strove to showcase singles that genuinely blended. Tim Trudeau explains, “We took into consideration music theory, such as what key a song was in, and the dynamics of the song. These are things people don’t think hip-hop has. We’re going back to the era when DJs were mixing and remixing songs together. There are years of music here, and we didn’t even go through the whole catalog.”

“Wages of Syntax 2 is a wonderful orchestration of intelligent lyrics, classic beats and well thought out, cross-genre blending that have raised the standards for all future studio mixtapes,” says Newville. “If you’ve never heard of Syntax Records, now is your chance to taste what has been missing from today’s music industry.”

Featured artist Braille says, “For me, this mixtape is very forward thinking and proves that people should be paying attention to Syntax Records.  It takes moments from the history of Syntax and incorporates them without ever loosing speed or energy. It tells a story.”

“It’s underground hip-hop in its purest form. Tight beats, dope rhymes, top-notch scratching and blending every song in an outstanding fashion,” RedCloud praises. “If you consider yourself a fan of ‘real hip-hop’, then quit reading this and buy this album immediately.”

The Wages of Syntax Volume 2 is available everywhere music is sold.

‘All Eyes’ Are On Syntax Records and Sackcloth Fashion