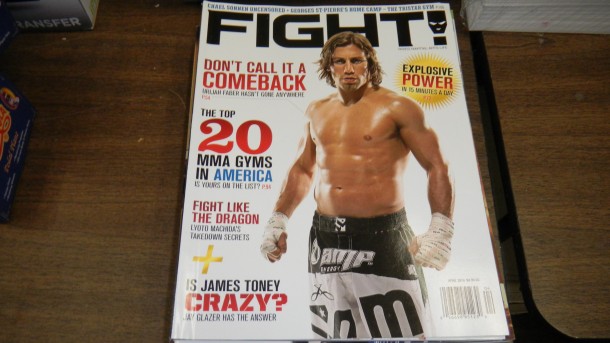 It’s not uncommon for those familiar with the Syntax Records brand to find hints of MMA intertwined both with the staff, and artists. In fact, some of the Syntax affiliates have been closely following the sport since before it was even called MMA. Thus making sense, that Fight Magazine contacted Syntax when they decided to do an article on independent music and MMA. They even mentioned Syntax as one of only three labels to have their logo make an appearance in the UFC Octagon.

Check out Fight Magazine’s April issue (Urijah Faber on the cover) for discussion between President of Syntax Records, Timothy Trudeau and Bear Frazer concerning the potential between MMA and the music industry:

Syntax Records is another indie who supports local cage warriors. The San Diego-based Christian hip-hop label has had mixed martial artists like K.J. Noons and Waachiim Spiritwolf appear on podcasts, and when Syntax President Timothy Trudeau heard Dean Lister was interested in wearing their company’s imprint on his short sat UFC 92, they struck a deal.

Although Lister dropped a decision to Yushin Okami in the unaired prelim, Trudeau was thrilled to have his label represented. “We were bummed it didn’t get televised and that he lost, but it was still exciting to have our logo enter the Octagon,” he says. “It was fresh for everyone involved at the label because they’re fanatics, so it’s a big deal.

…Earache, Syntax, and Deathwish are the only labels to grace the Octagon. Read the whole interview here >>>

Braille gets picked up for the Fros'T Urban Legends Tour

RedCloud – Hawthorne’s Most Wanted is #9 on CMJ Hip Hop

14 years ago
Watch This!
Social This!